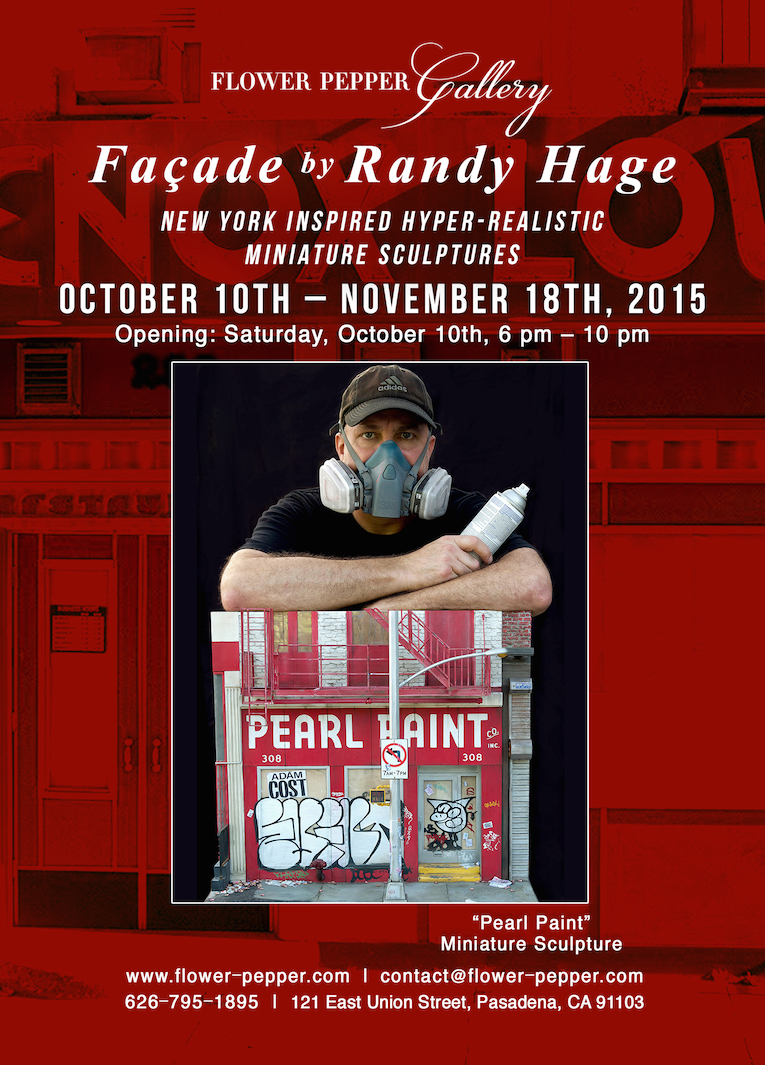 Randy Hage’s miniature sculptures preserve visions of the past, and encapsulate the memories and shared experiences that are connected to the disappearing facades in our communities. By documenting these fading storefronts, he honors and pays tribute to the very soul of our cities and people. Every mark of decay tells a million stories to those who have the eyes to see.

Flower Pepper Gallery is pleased to present its upcoming solo exhibition, Façade by Randy Hage. Hage is a renowned visual artist who uses his past experience as a TV/Film sets and props expert to skillfully recreate beloved storefronts that are disappearing right before our eyes. Working from his own index of photographs taken over the past 15 years, Hage not only preserves the memory and history of a place, but gives each location a voice to tell its own story.

This collection of works depict a wide range of mom and pop shops that once acted as pillars of their communities but are now either facing the impending threat of elimination, or have already shut their doors.

Lenox Lounge, opened in the 1940’s and has housed the music of Miles Davis, Frank Sinatra, Billie Holiday, and John Coltrane within its historic walls. However, after a doubling of rent costs shut it down in 2013, this Harlem venue tried to move locations but a lack of investors has put a halt on any plans to re-open. In Hage’s incredible replication of the Lounge, we not only see the threat to this venue and others like it, but we see glimpses of what it used to be in all of its Art Deco glory. You can almost imagine what it would be like to walk by at night and see the light glowing from the windows and hear the inspired music of the masters wafting down the street. In this way, Hage keeps the memory and spirit of The Lenox Lounge alive and allows us to imagine an era frozen in the past.

Another beloved business rooted in the arts community was Pearl Paints, located on Canal Street in New York City. Some even would say that this store helped SoHo transition from being a worn down industrial neighborhood to the thriving artistic community that became an anchor for the arts in the 1960s and 1970s. After Pearl Paints’ closing, past patrons were very vocal about the void being left in its absence. We can feel this sentimentality within Hage’s piece as it pays tribute to a place that was like a second home to so many artists over the years.

Additionally, photos that Hage then creates of his completed sculptures are virtually indistinguishable from photos of the real life original structures themselves. This side by side comparison only enhances the enchantment felt when viewing his meticulously crafted works. His photos are able to capture moments within his sculptures, that give credit to the illusion created and intentionality of each mark.

Every one of Randy Hage’s photorealistic sculptures has a story and immense history that is told through each brick and beam replicated. Some buildings are grand and historic, while others appear to be more mundane, but all were once cherished by those who kept it. By preserving the exterior of these locations, the artist honors all of the passion that was once held within them. The communities they served and the unique place they held in history, all play a part to communicate what is in danger of being lost. Facade by Randy Hage is a tribute to these stories and a reflection of an artist who is able to help tell them.

Featured on Hi-Fructose on May 19th, 2015: http://hifructose.com/2015/05/19/randy-hages-new-york-storefronts-photos-preserve-aging-architecture/

Featured on Fubiz (in French) on Oct. 12th, 2015 by Léa, Content Curator: http://www.fubiz.net/2015/10/12/miniature-new-york-storefronts/ Translated it says: Randy Hage is an artist fascinated by atypical windows of New York stores. It represents the miniatures from a photograph. All details are available on its models: the products in the windows to graffiti on the facades through the dead leaves on the ground. A goldsmith work to discover.

Featured on Antidepresivo (in Spanish) on Oct.9th, 2015 by Diego Gonzalez: http://antidepresivo.net/2015/10/09/nueva-york-en-miniatura-por-randy-hage/ Translated: Randy Hage is an artist who has managed to surprise many people with this magnificent work in miniature where reconstructs places in the Big Apple with great realism. Hage used very representative places of the city as shops and restaurants as well as points that were visually appealing for the artist. These locations were recreated in an impressive manner, is such detail that there used Hage graffiti and posters that in real life are in the streets of New York. Currently, Randy Hage's work is on display at the Flower Gallery in Pasadena, California.

Featured on The Guardian on Oct 6th, 2015 by Will Coldwell: http://www.theguardian.com/travel/2015/oct/06/new-york-miniature-model-storefronts-randy-hage

Featured on Hi-Fructose Magazine on Oct 7th, 2015 by Caro:
http://hifructose.com/2015/10/07/randy-hage-miniaturizes-fading-storefronts-in-facade/

Featured on Vice on Oct 9th, 2015 by Beckett Mufson:
http://thecreatorsproject.vice.com/blog/sinatras-new-york-immortalized-as-miniatures

Featured on AEQAI on Oct 21st, 2015 by Anise Stevens: http://aeqai.com/main/2015/10/randy-hages-lost-but-not-forgotten-storefronts/