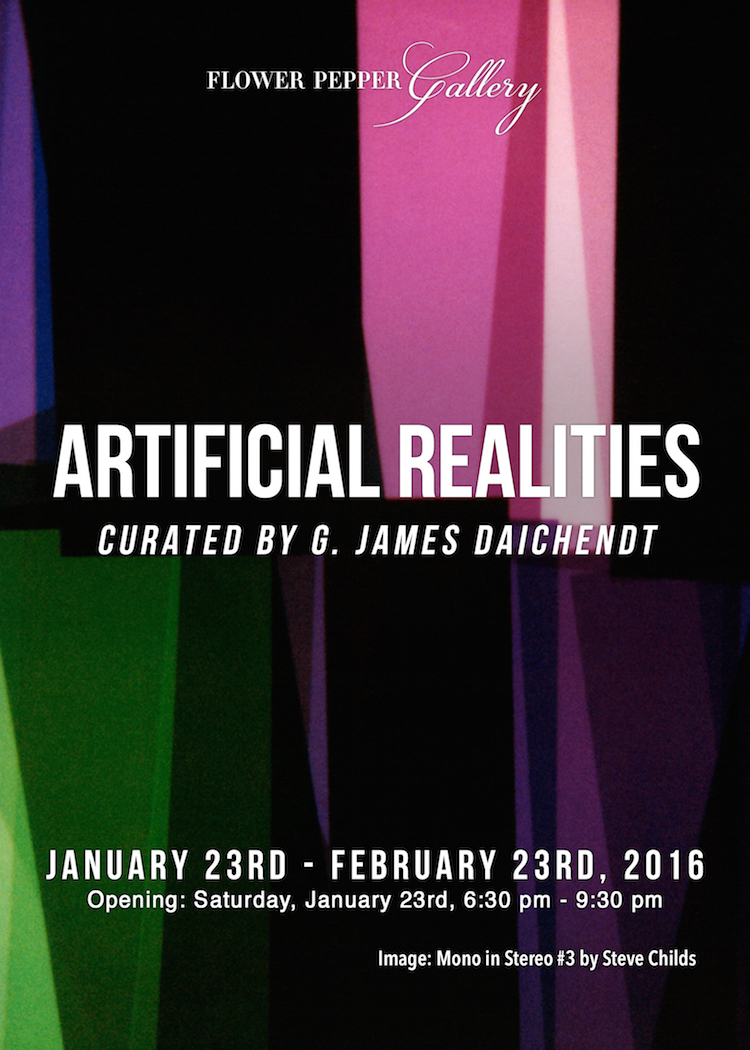 By deconstructing a normative understanding of our surroundings – we aim to create a customized alternative reality. Reflecting on southern California, these objects collectively force us to re-consider our individual perceptions.

On Saturday, January 23rd, Flower Pepper Gallery is pleased to present Artificial Realities curated by G. James Daichendt. This show features a wide array of stunning contemporary works from artists who have spent time living and reflecting upon their surroundings in Southern California. Every perspective is unique in that every artist has a different relationship with the place they have called home. Through their work we no longer see our surroundings with eyes so accustomed to their routine, but are given a chance to break free from the norm and experience a new reality.

Los Angeles native, Devon Tsuno, currently resides and works in Midcity, LA and heavily uses his environment in the ethereal, layered-silhouette style paintings he creates. The imagery he chooses is iconic to anyone who has spent time in the city of angels and immediately evokes a sense of nostalgia with bright, dusty gradients and familiar sunset-colored hues. His skillful combination of horticulture, industry, water, and sky effortlessly summarizes our subliminal memories and presents them back to us as if we’re experiencing them for the first time. Likewise, Steve Childs, reduces what we see to an abstraction of light and color where the subject is no longer of importance, but rather our emotional connection to what is hidden within the obscure luminous glow. This creates a world that is both familiar and mysteriously new and affects the way we identify our surroundings as meaning instead of subject.

On the other hand, some artists take a more figurative approach when investigating concepts of place and interpersonal relationships. Molly Schulps works with porcelain to create precious animal creatures that act as a metaphor to reveal truths about humanity and how we relate to others and nature itself. One of Molly’s tragically beautiful pieces in this exhibition depicts a bear within a tree trunk while a gleaming golden skull rests on top. “The bear trapped inside of the trunk is really about confinement and our struggle with predator and prey; humans being the ultimate predator and taking way too much from the environment.” Similarly, Macha Suzuki uses his work to tell stories that are drawn from his own experiences but in turn reveal aspects of human emotion felt by us all. Feelings of defeat, joy, nostalgia, and wonder are obscured and exaggerated so that they are only recognizable through a quiet contemplation that begins with amusement and ends in empathetic connection.

Alternatively, artist Craig “Skibs” Barker, who grew up in Southern California during the early 80’s when punk rock and surfing culture reigned, fills his work with layers of pop culture, memory, and personal history that captures a feeling of “voyeuristic mischief.” Graphic iconography takes us back to a time that is seen as a golden era for the west coast - a memory for some and a dream for others. On the flip side of the same coin, artist Kerry Hyatt chooses to highlight a growing threat she sees in Los Angeles of gentrification where the makers of culture are being pushed out to the fringes. For this exhibition she sheds “light on the disturbing truths/untruths that may lie within. I see this as a map of the city’s shadow.”

This exhibition houses the voices of artists who have approached the subject of our constructed environment from all different sides. While some investigate our surroundings as a whole, others focus on the way we relate to one another and ourselves. This gives us a chance to expand our own understanding of the realities we create and the ones that can inspire us to see differently.

About Curator G. James Daichent:
G. James Daichendt is Dean of the Arts and Humanities and Professor of Art History at Point Loma Nazarene University in Southern California. Dr. Daichendt is the Chief Editor of the academic journal: Visual Inquiry: Learning and Teaching Art and is an art critic for KCET, the nation's largest independent public television station. Recent books include: Shepard Fairey Inc., Artist / Professional / Vandal (2013), Stay Up! Los Angeles Street Art (2012), Artist Scholar: Reflections on Writing and Research (2011), and Artist-Teacher: A Philosophy for Creating and Teaching (2010). A graduate from Columbia, Harvard and Boston universities, Dr. Daichendt is currently writing a biography on artist Kenny Scharf.