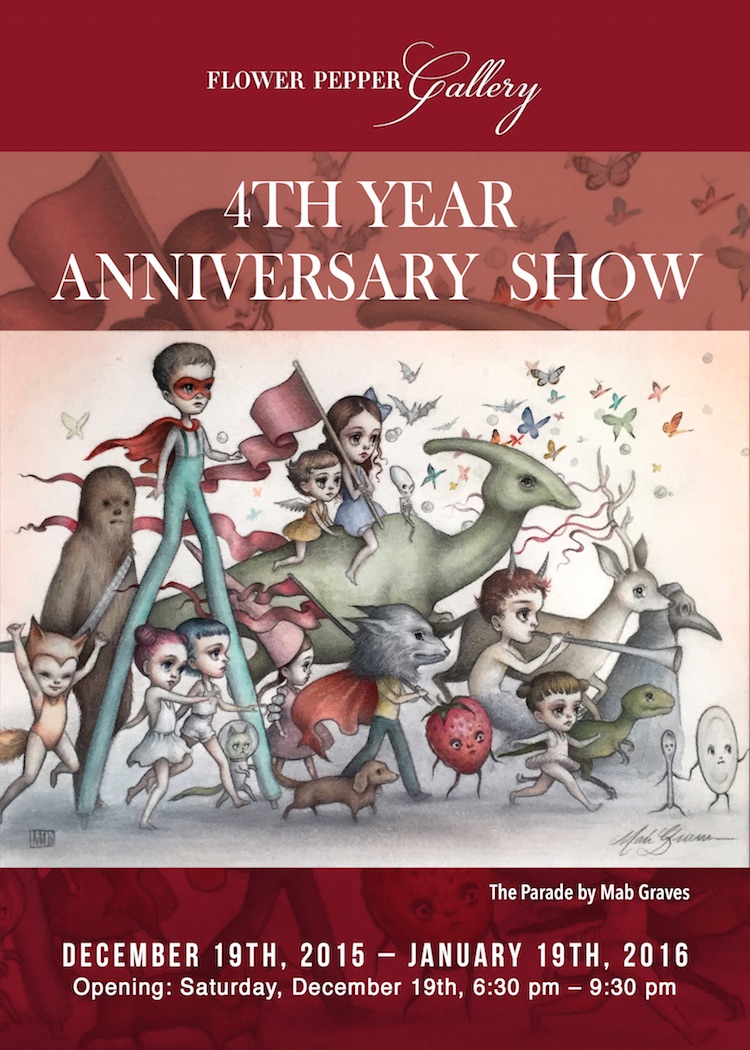 On Saturday, December 19th, Flower Pepper Gallery is pleased to present our 4th Year Anniversary Show featuring an exciting collection of works from a diverse group of local and international artists whom we have had the immense pleasure to show throughout these past four years.

We would like to take this chance to thank and celebrate our artists, collectors, and friends who have helped build the community we are so thankful for here in Old Pasadena. It is our privilege to work with artists both near and far and we look forward to many more years of showcasing some of the best art LA has to offer.

Each artist in this exhibition has been carefully selected for both their unique artistic voice and ability to translate their perspective in a way that speaks volumes to the viewer. Whether it is the doe-eyed melancholic characters of Mab Graves, the exquisitely undisturbed natural world of KiSung Koh, or the immensely relatable and humorous creatures of David Chung, each artist has something to say and uses their impeccable talent to start conversations and explore their uncharted imaginations.

For instance, Paul Barnes playfully combines imagination with his own surroundings to inspire even more mythical worlds and characters that allow us to separate ourselves from reality and be transformed through folklore and legend. On the other hand, Susanne Apgar finds inspiration through psychology and surrealism and combines the two in a flourish of highly rendered textures and hidden details that sparks our desire to look more closely.

Each artist in his or her own way has inspired us time and time again and this exhibition is yet another exciting opportunity to meet with their work face to face, to see and listen once more.

Join us for the opening reception of our 4th Year Anniversary Show on December 19th, from 6:30 pm to 9:30 pm, as we celebrate the past four exhilarating years and look ahead to all that’s still to come!

"Because the Anniversary Show window was going to be in place during Christmas, the Rose Parade and New Year's the concept became a graphic play on the words Happy Holidays. The letters easily became representative of holiday symbols. The H in HAPPY became a fat Santa just as the H in HOLIDAYS turned into Colorado Blvd., the route for the Rose Parade. As the letters progressed through the holiday calendar into the new year they became glittery and glam and a Y can so readily become a martini glass. So with a holly wreath and paper roses and mirror balls to help define the holidays, hopefully this graphic cartoon of those most joyous days of the year brought a smile."

Always a joy and honored to have Amy to do special window installation for our exhibitions!

"Amy Van Gilder was one of the earliest designers in the NY Muppet Workshop, hired during the first season of The Muppet Show. She left Henson for a time in the early 1980s to start a family, but returned to work on Muppets Tonight. She also had a cameo alongside Jim Henson in The Great Muppet Caper, as a patron of The Dubonnet Club.

She was later hired by The Walt Disney Company in the Imagineering Department, where she currently helps with integrating the newly acquired Muppets property into their theme parks. Her achievements there include design and theming concepts for Lucky the Dinosaur, the first in a series of free-roving Audio-Animatronics in Disney's Living Character Initiative, which would later include the Muppet Mobile Labs.